You are not connected. Please login or register
+3
Tolvo
Spurgun
Buggy Virus
7 posters
Go to page : 1, 2

The statues in Sen's always bothered me, but thinking about who might have made them and who might have built sens along with the amount of titanite demons there were made me realize something. No where else do we see so many titanite demons, and we know demon titanite is linked to the blacksmith Deity.

What do you think that he would have used this army for?
Tolvo

I'd actually think more in regards to Stone Knights.
Spurgun

I always thought that they were actual knights in armor.
Tolvo

What living being could move how they do?
Spurgun

The stone knight in the garden? i think that they could be the same species as the giants.
Tolvo

What I mean is, they are laying on the ground like that. A living being would not be like that. They would be standing, sitting, or leaning on something. Not because, it's less work to stand. But because then they can move after. Reasonably nothing would be strong enough in that armor to move due to the thickness of it. Also if you look closely at their eyes you'd see there is nothing inside the helm. While on the player you can see their face through it.
Spurgun

That's true.
you mean that they're machines and you "activate" them?
Tolvo

Think of them as magical automatons.
Spurgun

But what's their power source?
Tolvo

Think about where they are for a second, also remember the description of their sword.
Spurgun

I know that. I just hoped for their power source to be something else than "magic"

Perhaps with their proximity to Oolacile, that was the idea.
Spurgun

I think "magic" is a bit overused in many stories. So i hoped for something more tangible.
Tolvo 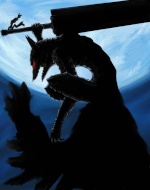 This is a really cool theory. Would this mean the blacksmith deity was Sen, then?
Tolvo

Yeah, that's an old theory of Acidic's that a lot of people forget about.
DoughGuy

The problem I see with this, is they have no legs. They simply have the cloak dress thing that takes u their lower half. Unless they grow wheels I dont see them moving.
Tolvo

Perhaps they were never completed, but yeah that does put a wedge in the idea.
DoughGuy

Well I think completing them was low on their priorities considering the number that exist. But the detail on the cloak says to me they were finished as they are.
Buggy Virus

DoughGuy wrote:Well I think completing them was low on their priorities considering the number that exist. But the detail on the cloak says to me they were finished as they are.

Well, being that the titanite demons grew out of basic slabs, perhaps adding a little titanite to the statues would clear up the details. Imagine one coming to life and the lower cloak part crumbling away bit by bit as legs shook off the shards.

And like some people say, maybe they were just unfinished.

SEANB240 wrote:This is a really cool theory. Would this mean the blacksmith deity was Sen, then?

I think it's Vamos.

And with the stone giants they are obviously stone armor that is animated. I used to personally think that they were cursed long dead knights who only the armor remained of. But Oolacile magic makes more sense, especially with the DLC.
Shkar

Hey, the dragon gargoyles in Izalith don't have legs either.
Tolvo

Wait a second...Nor do the undead dragons, Conspiracy!
Sponsored content

» statues in sens
» What are those statues?
» Question about statues
» Statues of Lordran (and more)
» Statues in Dark Souls: Who are they?