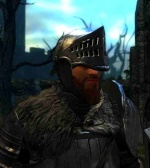 Hey guys,
Over the past couple of days I've been figuring out the ins and outs of texture mapping and learning about normal maps, and wanted to show off my work. I managed to swap out the hollow textures for some home-made ones- I wanted to make it so that when you go hollow, you turn into a T800 instead of a zombie, but outside of the chest, I was pretty much winging it...

what do you think? It's a bit more "children's skeleton Halloween costume" than murderous robot, but it's a start.

The images were showing up too big, so I'm linking my screenshots directory, which only has two screenshots in it:
http://steamcommunity.com/profiles/76561198067050917/screenshots/
sekkate

Re: Fun with DSFix