GrinTwist wrote:Some people do not have the common decency to dress their cake with dignity before eating it. Although I frown upon this idea that it is o.k. to eat your cake when it does not have clothes on we must be tolerant of these practices. Until we can get a civil right's movement going for dressing up cake before eating it it will continue to go on.

Sometimes I blindfold mine and give it a cigarette.
Soris Ice Goldwing

Always go out with a cigar,perferably Cuban if you can get it. I tend to make my cakes look their best.
Hydreigon11

Wow, we really have not got anything to talk about. How would you even dress a cake?

I put mine in a nice tweed blazer, a bow tie and a fez (because fezzes are cool). I also make sure that my cake is totally comfortable before it is devoured.
GrinTwist

I put my cake in some nice looking clothes. You know like a tuxedo, tie, and some nice shiny shoes.

I don't buy cigarettes or cigars so I'm not putting a cigar in the cake.

I mean once I put a single candle at the top of one of my cakes before (had to take off the hat first) I lit the candle and cried a little. It was a very emotional time since it was the cake's birthday and my birthday at the same time. Well after that little bit of drama with the whole candle thing I blew it out and started eating the cake.

My mom brought me homemade chicken soup and some nice tea. Moms are awesome.
Ahhotep1

GrinTwist wrote:Let's talk about the concept of nothing and how nothing affects everything.

We could also talk about cake.

Well, there is "Creatio Ex Nihilo" (creation out of nothing)...where cake is the first to survive annihilation. So now there is a universe full of cake!
Marino.

Just randomly started to read the first Harry Potter book and i noticed something .
What was it like during Voldemorts reign ?
I dont think the Books detail that Time at all .
The Muggels are unaware of Wizards so did Voldemort pay attention to not scare them or something ? Seems unlikely .
Or i just forgot about it . Its been Years since i last read it

Its explained in later books. The ministry ran around modifying memories of the few who survived encounters with death eaters who used magic in their presence, both during and after his reign. The murders were played off in the muggle world as thoroughly non magical or accidental. it threatened to get unmanageable but voldamort tried to off harry before it did.

Ah ok that explains it . Frogot about this whole Memory earasing thing .

In the German translation it says that they didnt have much to celebrate for 11 Years implying that Voldemort reigned for 11 Years before he killed the Potters .

And what did Dumbledore do ? Oh damnit my Memory is all foggy about those minor things :x
Harry Potter was part of my childhood goddamnit
PlasticandRage

I think Order of the Phoenix and the last book talk in the most detail about both Dumbledore's youth and things that happened during Voldemort's reign.

You know what's funny that I've just noticed? The forum's spell check marks the word snuck, saying it's an incorrect word, while it doesn't mark the words Dumbledore or Voldemort.
Forum Pirate

Don't remember the details. He formed the order of the phoenix who ran around fighting the deatheaters and protecting people though.
Serious_Much

I know right? SO annoying when the spell check tells me to put in z's wrongly or take out the u in colour...

In seriousness though, writing essays with medical terms in is a ***** with the spell check.. really needs a decent update and inbuilt dictionary, who the hell doesn't know what lactoferrin is?

I had to write a short story in Twainian vernacular last semester. My spell checker went nuts. Pretty much the entire thing was red.
Hatsune Miku

My right ear is stopped up with ear wax.
GrinTwist

My left hand is numb.

^I hate spellcheck I've written two psychology papers and every time I used a word that was even a little obscure from common language the word would be marked in red.
Hatsune Miku

Maybe it's somehow not in the computers database.
GrinTwist

I hate that tingling feeling when you start to move part of your body that has gone numb.
skarekrow13

I write a ton of reports for work with proper names and slang. Spell check hates me. I just add things to my dictionary to make the red stop
Hydreigon11

The only thing I dislike about adding my name to a dictionary is I then have to add the 's version of it and crap like that, come on spell check.

If I add it to the dictionary and put it down as a noun, it should disregard 'ses, we need that sort of program for spell check.
skarekrow13

Oh my god yes. Seriously, does "'s" make something a new word? Nope, if anything, it should be a green line since it might question the conjugation but that's not a spelling error. Sadly, any Android device I've operated does a much better job with checking and correcting mistakes and has an immensely better dictionary. Way to fall behind PC. Shame on you
Hatsune Miku 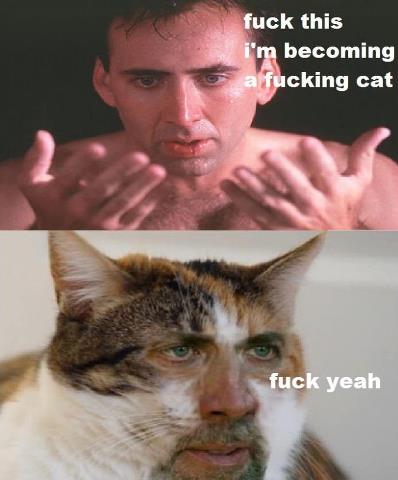 ^ this one is my favorite

2 days for the Forums birthday.
Hydreigon11

I just got DmC, and, I have to say, it is amazing. The story, the combat just bliss. Much more fast paced and rargh than DkS, but it will never replace Dark Souls, but it is a ton of fun. Any fans of DMC I would recommend that you get it, it's well worth the price and is one of the (if not the) best hack and slashers on the current generation of consoles.

Plus it was made by Ninja Theory, a British company, show us Brits some love.
Carphil

Plus it was made by Ninja Theory, a British company, show us Brits some love.

So THATS why there an England flag in his coat!
Sponsored content