After the game, I came home and tried to PVP in Dark Souls (unsuccessfully) and after that I decided to PVE, after killing off Lautrec, I noticed that he has a parrying dagger (never noticed this before) and the only other character who has one is the Darkmoon Knightess.

Then I got to thinking...They both have brass armor, they both have parrying daggers....why not slap em together.

After looking at it, it seems like it could be kind of effective if used right, it's got 40 poise, two buffs at it's disposal, and not 1 but 2 powerful dex weapons at it's disposal. The only downside really is that the damn thing has no shield...but where we're going we don't need SHIELDS!!!
WyrmHero

LOL awesome. I don't think having 2 buffs is effective, I just use 1 once per duel/fight. Could be useful for when someone casts GMB while you already cast DMB though. If you swap Shotel it gives you free space for max Dex. 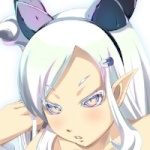 I didn't like mixing armor of favor with the brass armor. They're two different shades of yellow that look ugly together.
Myztyrio