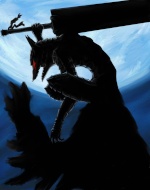 Seeing how Ornstein and Smough both grow when one dies is because they absorb the soul of whichever one dies, not unlike how you can absorb souls.  That is probably the lore-related reason you can't get both from the fight.  Smough is too large to be a human, and too small to be a giant.  I'm thinking maybe from eating the bones of his victims, he was absorbing a small amount of their power, thus growing stronger, but not much.  Realizing this, he then killed some powerful dude, possibly the firstborn, who's death has no obvious cause, and absorbed his soul, growing the the miniature goliath he is when you meet him.  He was sentanced to guard the cathedral when everyone left, and Ornstein was assigned as his warden, while also guarding the cathedral.  Ornstein would have been choses over all of the other knights due to his giant spear being able to pierce through dragon scales and thus, Smough's armor which grew with him, becoming bigger and tougher as Smough's body grew larger.  Weaponwise, Ornstein is probably the only knight physically capable of killing Smough, should he decide to try escaping.  Upon killing Smough first, Ornstein, probably feeling rather intimidated by the fact that that both of them were unable to defeat you, absorbs Smough's soul in an act of desperation to perform his duty, and also save himself, and thus becomes very big, since Smough's soul contains the power of other souls.  If you kill Ornstein first, Smough laughs as he smashes Ornstein's body and absorbs his soul, possibly excited about killing you, and finally being free, thinking that his new immense power will be enough to overcome you with ease.  Mostly speculation, slightly based on ingame facts, but seems plausible.
_________________
PSN - Coryf2209
Steam - _MN_Chance
Dibsville

This seems like a very plausible explanation, and it makes a ton of sense. I like the idea, but there are a few things that may contradict it...
Smough actually wanted to be ranked alongside the Four Knights. Being the Executioner that he was, it's possible that Gwyn simply sent him to guard the Cathedral just because of the way he was. Ornstein and Smough may just have a deal that should one die, the other should absorb their power in order to defeat the intruder.

Think about it, what better guard is there than one that will gleefully kill an intruder?
_________________
PSN: Dibsville
The Exiled of Ariamis; join the cause!

Since they are both immortal, it's quite possible they developed a relationship, being the only living things in the building, since everything else is an illusion except the giant blacksmith way over in the far side.

"Think about it, what better guard is there than one that will gleefully kill an intruder?"

But again, Smough wanted to be one of the Four Knights.

Also, Ornstein is arguably the strongest of the Four Knights lore-wise, so if Smough were strong enough that Gwyn would order Ornstein to oversee him, then it probably would have been a better choice to simply kill Smough.
_________________
PSN: Dibsville
The Exiled of Ariamis; join the cause!

There is also the possibility that they might both be illusions created by Gwyndolin....

Thxodore wrote:There is also the possibility that they might both be illusions created by Gwyndolin....

It's a good thought, but they don't disappear when Gwyndolin dies like the other illusions created by Gwyndolin. (i.e. Giants and Batwing Demons).
_________________
PSN: Dibsville
The Exiled of Ariamis; join the cause!

True, true. In any case, I believe that Ornstein was indeed the Captain of the Four Knights, and the strongest lore-wise. I feel like his role was underplayed too much in Dark Souls compared to the other knights. Seeing him and /or conversing with him in the DLC would have been amazing, don't you think?
SadPanda

Stein 'n' Smoog are strange characters. They were more than strong enough to protect Anor Londo from the dragons (not to mention Flan, Gwyndolin, and Gough.) Why they never went to see if Gough was still alive I have no idea. And every Silver Knight has a Dragonslayer Greatbow, and since the Everlasting Dragons were gone, they wouldn't have to worry about stone scales. So there was really no point in the gods leaving Anor Londo. Only three ever got past. And that's Havel, Tarkus, and you.

Loved that comment Panda. That is true. But all the gods left for reasons other than the safety of AL in my opinion.

Gwynevere and Flann? It's hard to say why they left. Any idea?
SadPanda