Help with my PVP Build

Help with my PVP Build

I am new to PVP on dark souls and have gone with a tank build but I seem to have a bad connection to the server so when I dual a dex player that flips all over the place I seem to lag behind and it's really easy for them to get behind me. So can anyone help me out with some tips to defend my self??
reim0027

Get a crystal ball and look 1 second into the future . . . J/K. It is very frustrating. Sometimes, I see someone, who is still locked on, suddenly turn their back to me. They are still in front of me, but facing away. Then I get teleported into a BS. If you see them do that, unlock and turn around or roll to the side.
_________________ 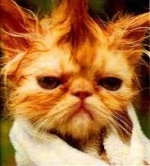 there no real good way around backstabs that are deliberately camped for...BS fishers have it easy in DS unfortunately...and if you play with the shield up all the time, it make their life almost easier.
One way to avoid that is to bait them into trying to BS you and unlock when they come close as Reim0027 said. Interstingly this has been taken into account apparently in DaS2 since you have to direct your swings even when locked on.
And yes PvP in DaS has a component of half a second up to one second of anticipation...this is the hardest thing to get used to.

there is always the possibility to wear at least one piece of the armor of thorns: this allows for a minimal amount of damage to the opponent when you roll...this is sufficient to cancel their BS if you rolled out of their BS fishing at the same time they triggered it...it works pretty welll...but then again you have to roll at the ssame time or slightly before.

hope this helps
_________________
Artificial intelligence is no match for natural stupidity.
shadowforge

ok thanks. one last thing how douse the back stabbing in dark souls work because I had my self backed up to a wall in a fight and the other person still managed to back stab me
TheMeInTeam

Get a crystal ball and look 1 second into the future . . . J/K. It is very frustrating. Sometimes, I see someone, who is still locked on, suddenly turn their back to me. They are still in front of me, but facing away. Then I get teleported into a BS. If you see them do that, unlock and turn around or roll to the side.

I don't see how to prevent this with any consistency unless you're already familiar with the amount of delay your opponent is getting. I get poise-stabbed a fair amount in the forest this way; in one case I kicked him while he was in front of me on his screen, and after my kick animation completed he teleported behind me and got a BS anyway.

It's amazing how much the meta revolves around it. Same night, on a more tolerable connection:

Opponent has a demon greataxe, but it might as well be a hornet rapier and it's easy to tell what he's going for (why these player's don't just gouge VIT and go with an elemental rapier + hornet is beyond me, it's not like they ever hit people with their normal attacks and rarely try to do so lol). Fishing fishing fishing. I'm in full havel's + eagle shield + silver knight spear, which I actually didn't have out at first but watching what he was doing I wanted some fun

. This player didn't know what to do after getting kicked a few times (you can only strafe-BS kicks in bad lag), since a spear r1 after a kick will hit. It was really sad. That player got worked down without even coming close to hitting anything but the shield.

Eagle shield is really lulzy with rapiers and spears btw. I like spears a bit more due to the kick and inability to get ripostes, but since everyone fishes anyway I decided to make a build where fishing makes sense for them, and then just kick + stab them over and over haha. It's not that easy to parry spears when spaced well + use odd timings/kicks/r2s.
_________________
There is no "I" in team.  There is no "we" either.  There is a me.
Dolan would like you to turn around and pick up that item on the ground.
Sponsored content