In this Thread you fill out the sheet according to how you would survive the Zombie Apocalypse .

Here is the sheet 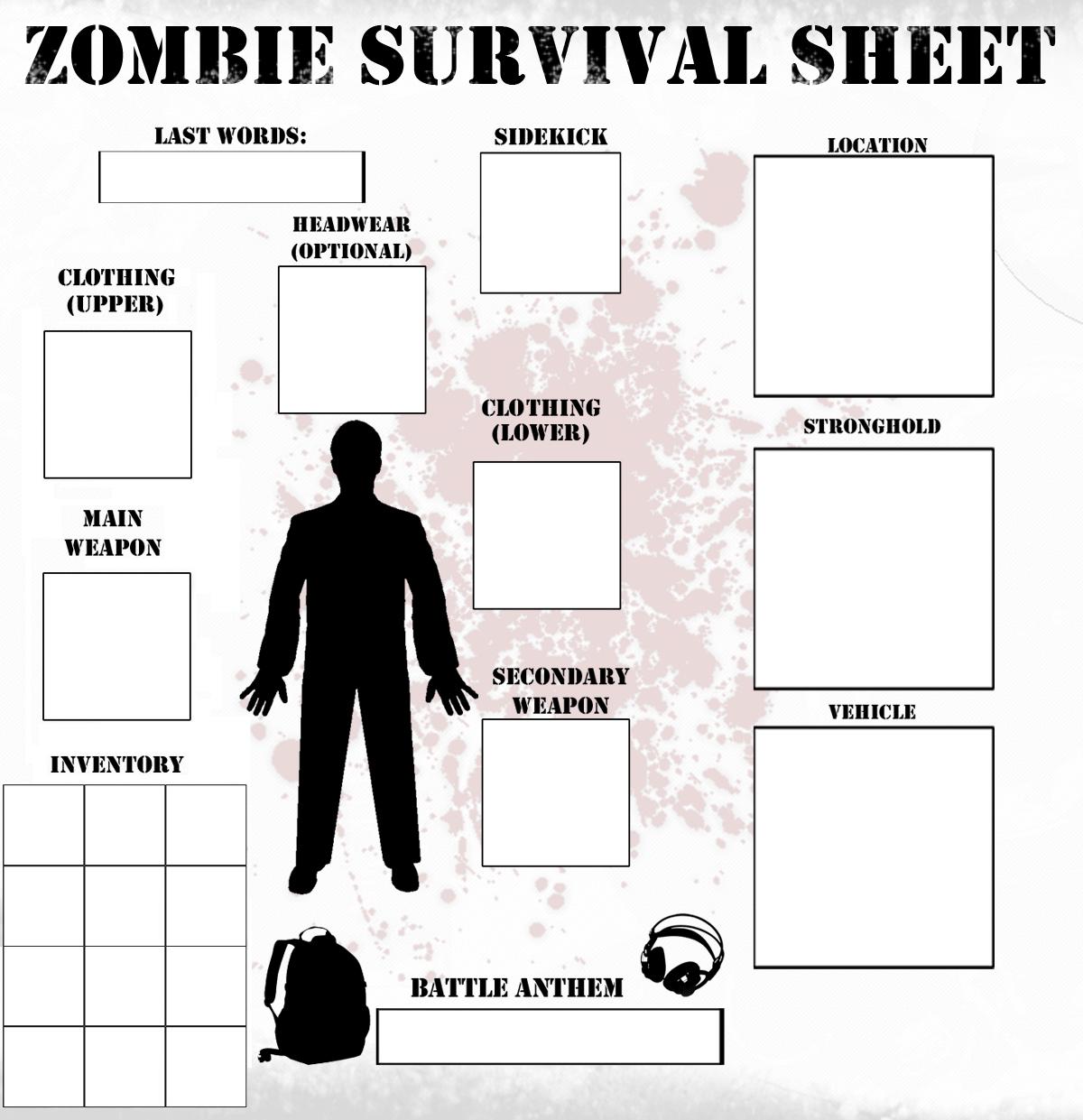 And here is mine . 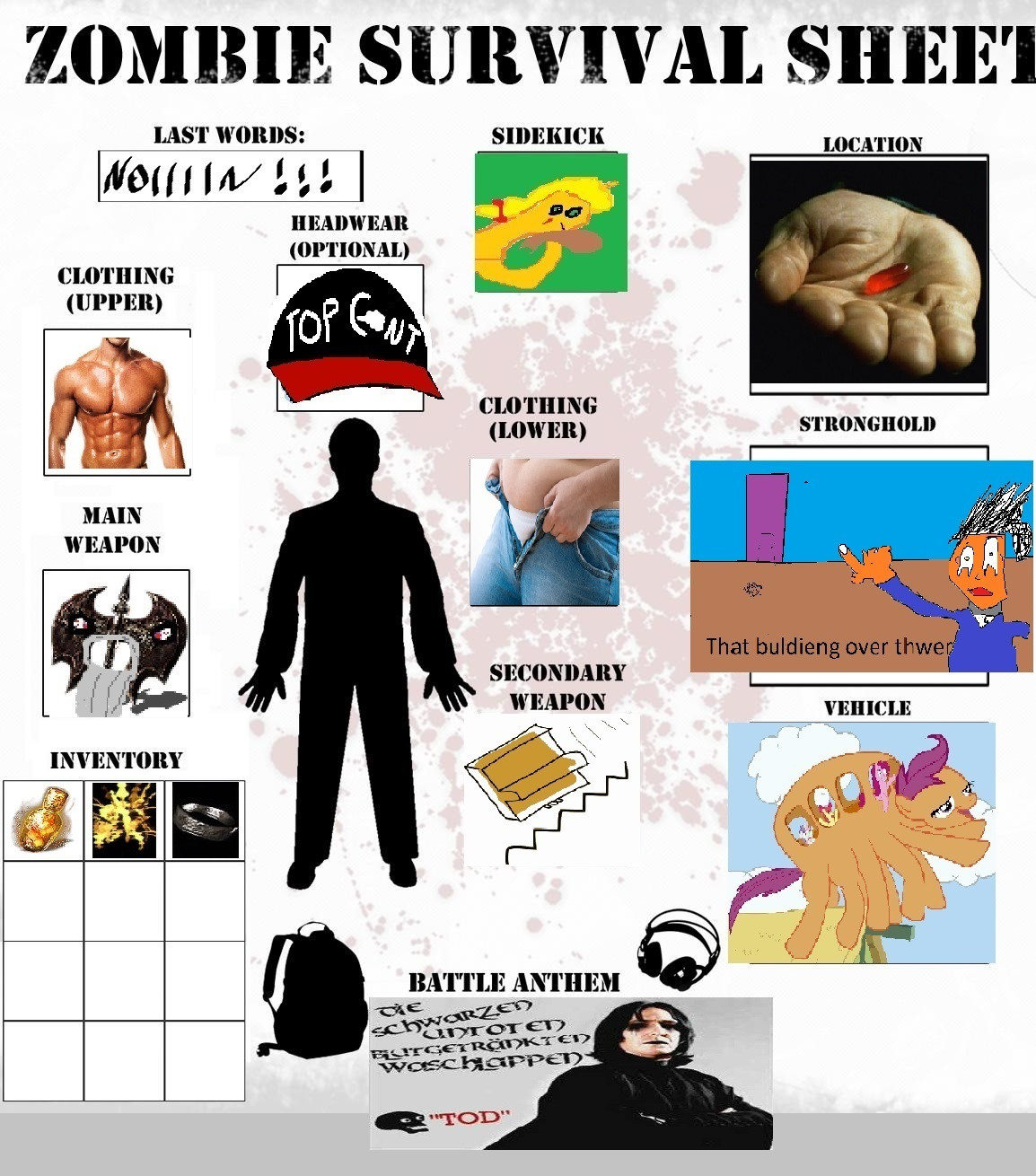 Exposition:
My Sidekick is, of course, former-Alicorn-now-Horn-smoking-Pegasus Applejack .
The Location is the real world .

My Stronghold is that Building over there, in the fifth floor, and it doesn't have an elevator !
It's tough to get up there .

My Main Weapon is my trusted Bearded Axe .
My secondary Weapon is a falling Piano, that sh!t hurts if you throw it out of the fifth floor .

It looks hard. Maybe when I'm not so tired.

Spoiler:
Though I suppose that says enough about my chances of surviving the zomber apocalypse

I can't do pictures but if text counts:

Spoiler:
Last words: Aaaahhhhhhgghhhhhhh
Clothing upper: T-shirt. Likely Buffalo Bills related
Clothing lower: Jean shorts
Headwear: if I can find it (my brother might have it) the chain mail mask I made ages ago
Sidekick: My daughter (although I'd be telling her "careful sweetie" so much it'd be ridiculous
Stronghold: My Corolla aka "mobile oppression palace" to the zombies. This likely counts as my vehicle too.
Location: All over western NY
Inventory: Chainmail arm pieces (pictured now on Fextralife.com), coca cola, gummy bears, 42 cents in change
Battle anthem: The chicken dance
Main weapon: The battle ax under my bed
Secondary weapon: the sword under my bed

now guess who doesn't let his daughter play under his bed? 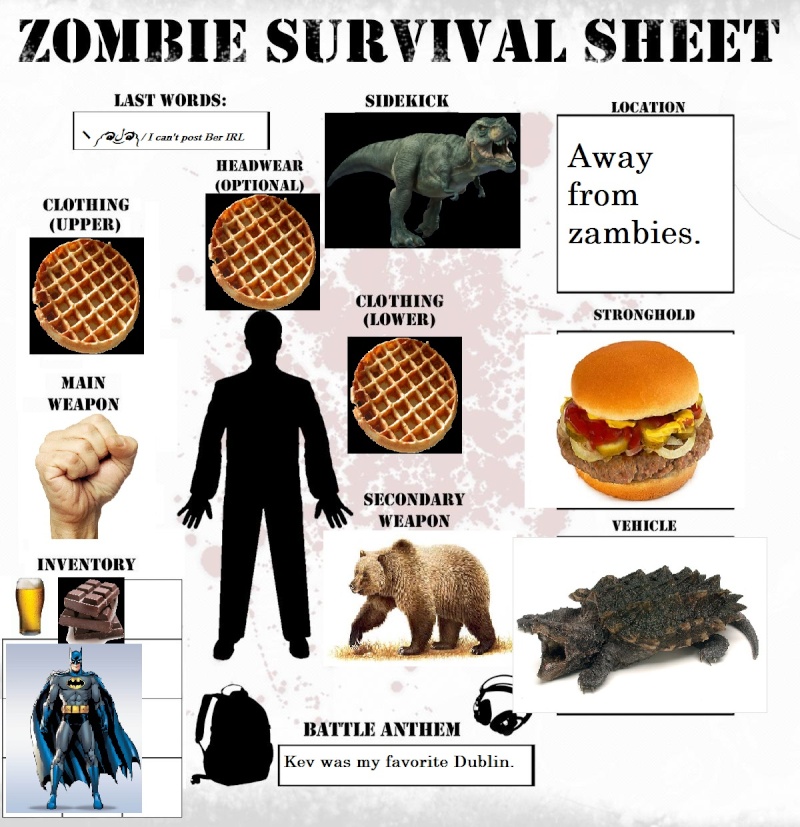 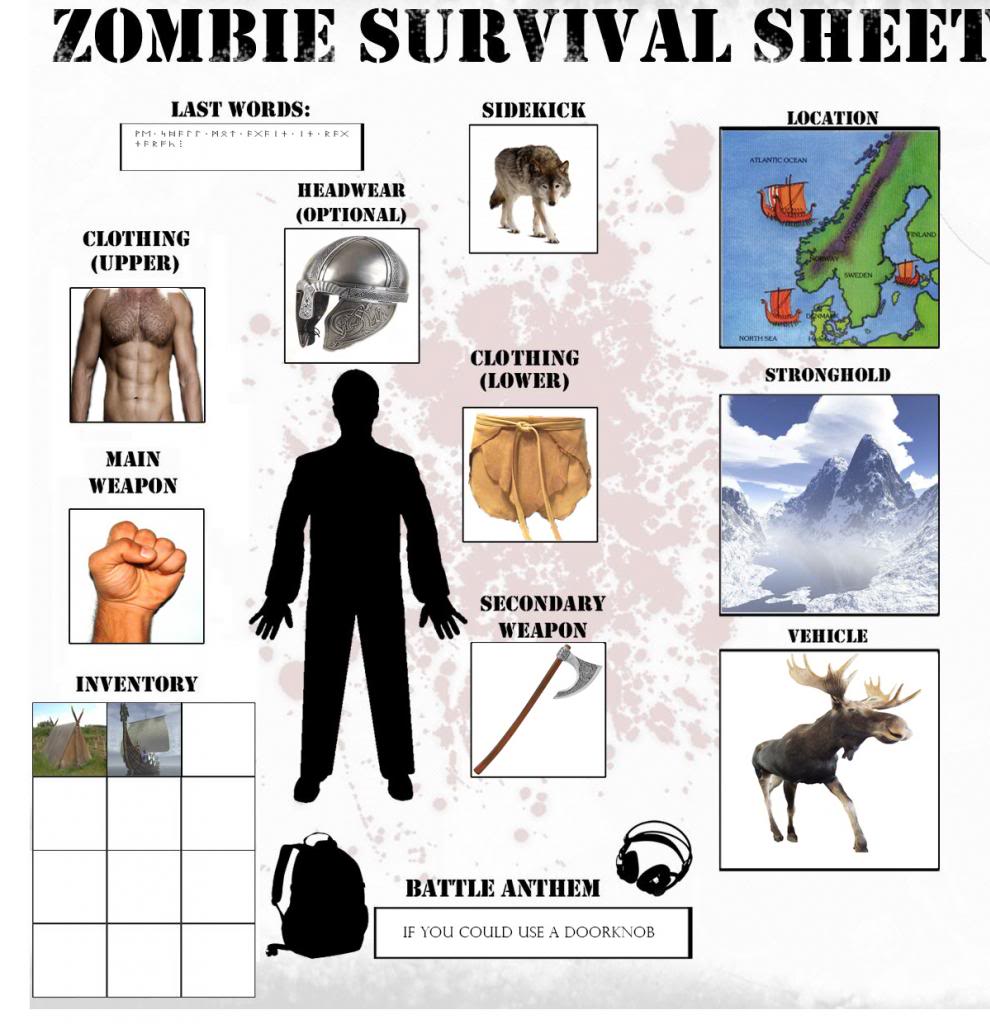 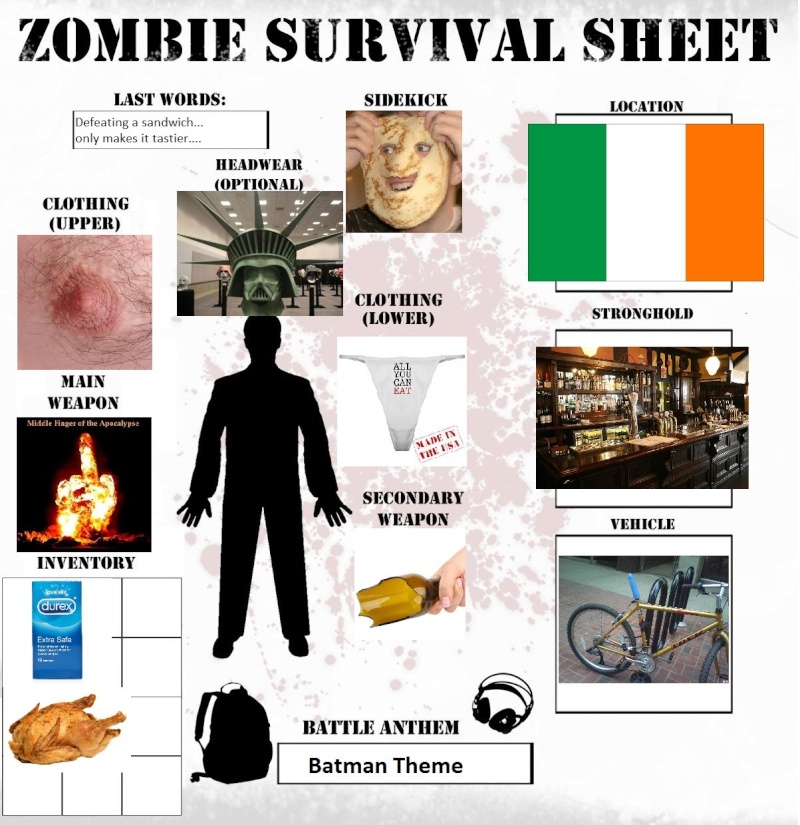 Sidekick: not likely. If I'm working with people, everybody is equally important. I'll not waste time with dead weight.

Stronghold: The summit house of crystal mountain washington, if possible. frozen zombies are easy to dispatch.

Transportation: bicycle or my feet. Ski's/snowshoes on mountain

Battle Anthem: Music is a waste of batteries that could be used for lights and lowers awareness. (none)

We are Exiles, and our home is Painted with the blood of trespassers.
Encore

Last ride of the day: 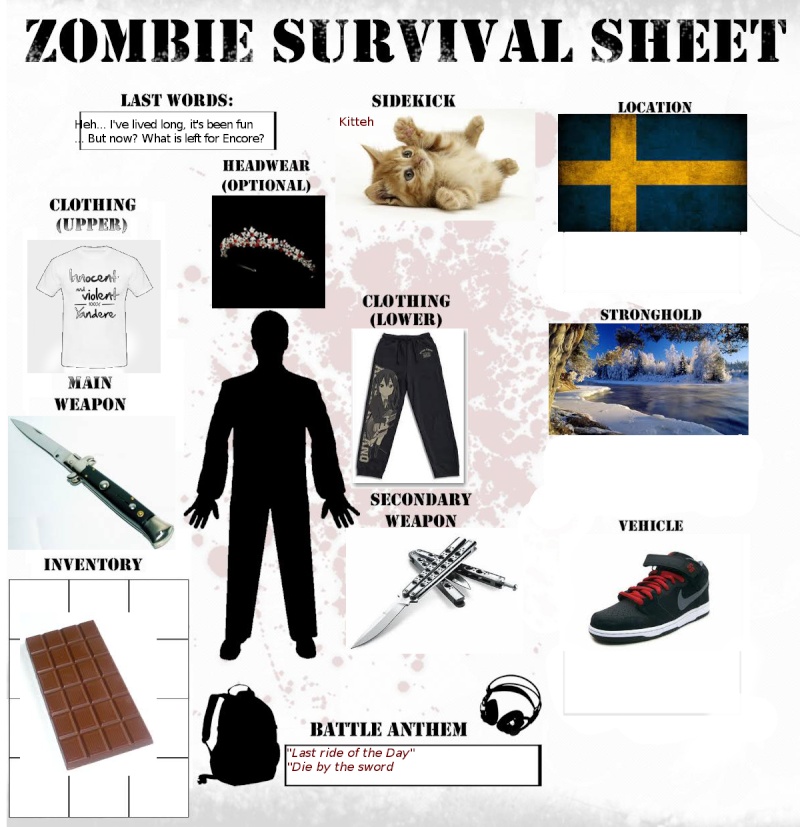 "I'm soon running out of chocolate, I should've brought something more... Productive with me, or nourishing! Anything, to be honest" He says before shrugging his own hunger away, bored and sighing

Haha... They've not really come here yet, but I've seen 'em, they're... Kinda interesting. Some of the girls are quite cute, but that's because they're not completely decomposed yet... Wonder if they'll bleed? He thinks to himself as he flicks his switchblade back and forth. He had stolen the switchblade and butterfly knife from his mother's locker before he decided to leave the house.

He wanted to put an end to the madness, the pandemonium of death and destruction that happened since the disease started to spread... If it even was a disease for that matter, might as well have been a curse for all he known.

His family could've probably survived, at least for the coming 2-3 years, they had pulled together a few friends and built some seriously awesome protectiony stuff, like bunkers, electric fence and ****.

With him he had taken his cat, which was close to starving. Luckily, he could feed it small animals he killed whenever he found them, put he hadn't been in the forest for a while now, and it was winter so most things was harder to find, since he barely knew how to track stuff anyways.

The clothes he had taken was... Not the most fitting for wandering the winter anyways, but he just, as he always did, shrugged and made a fire. Lucky his father learned him how to do it when he was young. Wildlife survival in general he knew quite well.

... It wasn't long after he started to hear the deadly moans of the dead, and turned around to see a small girl, kinda like those he thought cute.

"Hehe... I should kill her, shouldn't I?" he thought as he flicked the switchblade and showed a faint, near sadistic smile. He put his music on, shuffling between Nightwish and Van Canto, two of the bands he loved listening to.

Every stab did nothing, and eventually he was pushed over and struggling to keep the small dead girl from mutilating his already rugged corpse. He started to reflect on his life and, as he felt her bony hands claw into his body he thought what would come to be his final thoughts.

"I've seen a lot, I've experienced a lot. Most was rough, a lot was horrible, but some was... So lovely."

He, before he died, was able to say a short sentence, but he felt it was fitting...

And thus he failed to help those he loved, but at least he tried until he passed away.

^ Lik if u cri evertim