Put mine where ever you see fit. Since I still have to write a proper bio for both anyway. Thanks for letting me put my spoiler here, though. It was more for logistics so I could easily come back to it and do a proper job later.

I thought there was a proper RP thread that consolidated various stories. But it seems those threads are quite spread out. Creating a story subsection would be a good idea.
Wilkinson3424

Emergence wrote:I will get through them.  I have not been getting the watch alerts for some odd reason so it slipped off my radar.  There would really be no easy way to hand the thread over, it would require a ton of copypasta and linking as far as I can figure.

Yeah, I figured it would be more trouble than it's worth.

Oh... And this is embarrassing on my part but "The Exiled One" is not actually part of the Exiled of Ariamas. I should have made that more clear.

He is unaffiliated with any covenant. He just resides in the painted world.
Pale_Drake 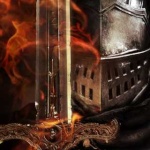 Appearance: Tarnished leather hood that hides his eye. Robes that would be warn by great sorcerers, along with gaunlet and leggings made out of solid brass. He wields a well kept falchion, caduceus shield, and a powerful pyromanicer flame. It is unclear about his eyes and hair, no one has seen his entire face.

Battle Skills: Self-taught; he has trained himself with curved blades, but pyromancy came after he took on the teachings of a man from the Great Swamps. He quickly learned about the flames and how they are used.

Bio: One of the many demon hunters who went to Boletaria during the deep fog. He went in search of the power demon souls could bring. After obtaining and absorbing the souls he collected he gained so much power that he broke free from the fog...almost as if it reconized him as a demon. He then vanished without a trase for years, until the out-break of undead began. He was in search of souls, he roamed around Lordran in search of souls. It didnt matter if it a normal soul or lord soul, he just kept devouring soul after soul. His blade now imbued with the blood of those who had fallen to his blade it now seemed occult like, and his pyromancy flame began to burn more chaoticly. He now roams Lordran killing all that has a soul.Even those who aren't in his time nor dimension aren't safe from him, he pursurs all with souls. He even kill all Four Knights of Gywn in search for souls. His demonic hunger has lead him to the from deepest most acursed places of Lordran to its most holy and divine santuraries.

They say the eyes are the gateways to ones soul...no one has seen his eyes.
Acarnatia

Gender: Male
Age: 21
Race: Astoran
Bio:
History: Nevis was born seemingly humble origins; a dirt-poor freeman and wife, between the city and the countryside. Beneath this simple appearance lay something much darker; the father, once knight of the underworld who relinquished his trade, and his mother with a history of abuse and the child of a soldier, was born with something strange inside him. This child inherited an animosity perhaps unlike any other, a seed of hatred with a potential yet unseen by the world. Perhaps, the Dark itself sensed this potential and touched the babe before he was even born, creating him as its perfect champion. And, yet...
The child grew in a far kinder, more loving environment than most of any class. He was intelligent, kind sweet. The seed went unnutured and did not sprout.
The child, though, was enamored with stories of masters of a craft, those who bore a single skill of legendary, unequaled proportion. He compared himself to his heroes, and wondered what his gift was. Test what he would, experience what may come, he found none that awoke the deepest recesses of his soul as he knew it should. Years passed, and the child of six grew anxious and frustrated, and even depressed. One day, the child sobbed aloud to the heaven, tears upon his face to tell him, answer him, what his greatest potential was. And it answered.
The seed awoke within him, and he felt a hate beyond at the very limit of what a human may harbor. The child, terrified, closed his heart, his emotions, by becoming empty, by turning his heart into nothing. Dead inside, the child nearly made himself the same without. For his family, though, he stayed his hand, and grew.
Years passed, and he grew ever further more distant and unusual. He believed himself unseen, not understood. And how could they? They, who would not understand, let alone believe his plight. He spent more time with books and stories than with people, and wrote much. He had a gift for it, especially poetry, though he payed little attention to it. His education suffered, though, as he was unwilling. Incomplete and inexperienced, his outer existence began to mirror his within; nothingness.
Then, during a hollow outbreak, he died.
And then, the Darksign branded his corpse.
Pale_Drake

Appearance: Hood & coat made for a wanderer, silver leggings and gauntlets. Whited eyes & occult energy riddled scales, with pale skin and scales. Longs white hair and a pendant around his neck.

Skills: Though possessing incredible strength, he prefers to wield knives and thrusting weapons. He uses a rapier and off-hands a knife, both are finely made. Fast nibbled fighter, is also adapt with several forms of magic. Has a catalyst and another knife hidden away.

Bio: He is the son of Seath the Scaless and brother to Priscilla, he was born shortly after Priscilla but was hidden away from Gwyn. He was hidden for most of his childhood in the archives with his father helping conduct research. The only place he wasn't allowed inside was the archive tower which only the channelers were allowed to be in. One day he pickpocketed one of them and entered the tower only to find the dark side of his father's research. He saw the women his father kept locked up, and the serpent-like creatures guarding them.
He was trying to free them but was caught by a channelor and was brought before Seath. His father sentenced him to head to Oolacile and find out about there magic...but that's when the abyss began to spread. He wore and attire to hide his scalely hide from other travelers, one begin Artorias himself. He traveled along side him exchanging words about random subjects. Sif knew that Grell was a crossbreed and often times growled and snarled at him. Once there they parted ways, Grell went to the entrance of the abyss.
As he tried to enter to began to overwhelm him, he felt the darkness coursing through him. His mind began to dull out and his vision blurred. He felt as if they abyss was absorbing into his very soul. The draconic nature began to rage and lash out, while his deity nature began to fade and malformed into another being entirely. His senses began to be overwhelmed and his body collapsed to the ground. He blacked out entirely for an unknown period of time.
When he came to it he was laying next to artorias, both were injured and riddled with what appeared to be stain of magic marks that burned to the touch. Heavy breathing could be heard, Manus was be hide Grell. Grell was frightened by the primeval human and coward next to artorias. Suddenly Artorias leaped to his feet sword readied. He signaled for Grell to run, as Grell fled he was swarmed with humanity phantoms and sounds of Artorias's screams in his ears. He awoke in front of a large serpent who introduced himself as Kaathe.
He was told the "truth" about Gywn & the other lords, including his father. Outraged by his father he joined Kaathe and was given the power of the Darkwraiths and mastered the black magic's. Years later he traveled back to Lordran seeking the Lords killing them off. Once he got into the Kiln of the First Flame he killed Lord Gywn with the very magic he tried to stave off. Once the death of Gywn he simply left and ushered in Age of Darkness with him as its lord.
Sponsored content