I happen to be on my way out.

I happen to be on my way out.

So i just hit #1 on the book of the guilty, which the completionist in me says I've now beaten dark souls. So i've deleted the char and I'm now quitting.

Let me explain. Dark Souls is more of a chore at this point. If noone backstabs the other one, i can beat nearly anyone... and I'm okay with that. I've never had a hard built need to be the absolute best player in the world, and i appreciate that others will always be better then me... because philosophically, i feel the world would be less magical if you only had down to look...

So don't get me wrong, but when it's reached the point where you've reached the peak of your skill, and do not get much if any better, then you start to enjoy the game less. It's gradual, and i reached that point 3 months ago. A lot of the time, i put in dark souls because of habit. I'm -so- good at dark souls, that every other game i play is alien. I'm so good at this one particular title that i can pick it up after a month recess and lose no skill.

So i embarked on a journey 2 weeks ago so i could finally settle my lasting grudge against the game. I was going to wipe any semblance of memory of it being difficult away for me. I took part in FireLESS's extinguish the bonfire thread, and had a couple weird, still unexplained events, such as "unstable bonfire" that have yet to be explained. I hope you all figure that out btw! I reached NG 7 without ever using a bonfire except for firelink, and killing Gwynn again. I got to #1 in the book of the guilty, and i reached level 711.

Well anyway, i've surmounted a large amount of information about pretty much anything dark souls, and i can answer a lot of questions about the game at this point, which is why i've spent more and more time on the forums. It is my duty to pass on any information i might have to others so they can also progress at a similar rate... so please ask me about anything, and i will answer with my best understanding of how the concept works.

The Great Club does 300 more backstab damage then any other weapon in the game.
Crystal Magic Weapon actually does more damage then Dark Moon Blade. I can not figure out why.
The game performs an autosave when you gain souls, die, fall a lethal distance (even if you have not died yet, it saves!), kill an area boss, kill an enemy, have a phantom enter your world, or perform a backstab. You can corrupt your data during approximately a 0.5 second time frame during these events.
A corrupted data can sometimes still load, and you'll have the Elite Cleric Armor on it. This is how i have obtained my first, and final pair.
The Ghost Blade has an approximate drop rate of 0.3% I received 18 blades after killing 6000 of the ghosts.
The Chanellers Trident has an approximate drop rate of 1.2%
The Tail HP of a boss does not increase in NG+
The Bridge Wyverns Tail has approximately 200 HP
The Gaping Dragons Tail has approximately 1500 HP
The Gargoyles Tails have approximately 350 HP (The parish ones!)
The Centipede Demons tail has an inconsistant HP value, ranging from 400-900HP... perhaps this item comes off after a certain amount of poise damage? I don't understand this one.

Lava does no additional damage in New Game +. With Flash Sweat and 400 Fire Defense lava does 23 damage per "hit"
The Maximum HP of the Player Character is exactly the same as NG+++++++'s Pinwheel. (Coincidence?)
The maximum Damage any enemy can do in a single hit is 2751. Black Phantom Ultra Greatsword "Black Knight" in the Kiln can perform this in NG+ with it's power attack. I tested it with this.

A player can similarily do 2751 damage to a Flipping Mask Tank with a riposte from a CMW Crystal +5 rapier + Hornets Ring. I find this a funny coincidence, so i'm just noting this.

And, of course. One in Six children will be abducted by the Darkwraith during their lifetime. 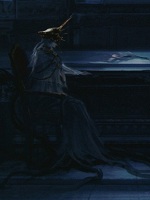 Congrats! Looking at how slowly I trudge up the Book of the Guilty, that truly is a commendable feat! I'm glad that you've gotten all you can out of the game

You ideeaught! That's an amazing accomplishment you just threw away xD
SATLOS 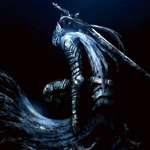 i know he/she was just a compilation of pixels and code, but he fought hard for you, but now hes/she is lost forever, such a death saddens my Player Character heart.
WhatDoesThePendantDo?

Hope to still be able to chat with you on here, but everyone has their limit.

As for DkS I find myself playing less and less, not because I'm enjoying the game any less but mostly because much of the novelty is gone. I now mostly do covenant-related things (user ones, not in-game ones) and PvP with some of my favorite toons, though Burg PvP isn't what it used to be, so that's let me down a bit. Random PvP is broken which is why I have such high hopes for the DLC arena.

what are u going to do with spare time now?
omega Elf

'sheds a tear' whoohoo! you'll be missed, i'm sure? what about dlc?, hmm,
just more of the same!, i haven't even beaten ng, i'm already bored, might
be some interesting new pvp elements tho, if not, i'll be done too, on to bigger
and better things, maybe, or i might just stay, no.
Rynn

I'll still post on the forums, but my visits will be less frequent now, as except to tell other people the same things they already know, i've not much reason to continue showing up. I find i'm not interested in the DLC, a few new area's to cautiously explore would only increase this games shelf life, to me, by a few weeks by now.

With my spare time i'll be doing what i should have done for a year now. Playing new games! I'll also probably revise that D&D esque thing i did in General Discussion.
befowler

befowler wrote:Rynn, are you XBox? My PSN book of the guilty has had the same guy at #1 with (I think) 7106 sin for a while now. He's over 2000 over the #2 person so presumably didn't get there recently.

i am an X-box player.
Jansports

I'd never had nor would I have a chance to play with you being PSN myself. But I always delighted in reading posts accompanied by a certain pony.

I noticed you left out seath's tail among the others, on purpose?
befowler

Gotcha. Well, if you've conquered Xbox, obviously you need to come over to the PS and defeat us all there. We have more...uh, egghead builds? I don't know what the cool kids are into these days.
Rynn

Jansports wrote:I'd never had nor would I have a chance to play with you being PSN myself. But I always delighted in reading posts accompanied by a certain pony.

I noticed you left out seath's tail among the others, on purpose?

What other tails did i leave out?
i only cut off seaths tail once: ever.
Sponsored content