For a second, I really thought Derpy was Silver Spoon.

So not only is Derpy prone to doing stupid things, she's also bad at math too?

I feel bad for this pony.
Hatsune Miku

Am I Derpy? Cause I'm bad at math?
Soul of Stray Demon

I'm the coolest derpy pony that has ever existed!
Soul of Stray Demon


Also no I'm referencing this: 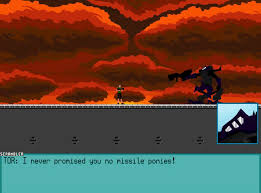 Missile ponies? Hmmm Okay that gave me about forty-five ideas that can be done.
WhatDoesThePendantDo?

C'mon guys, I understand this thread is in Off-Topic and a little derailing is Ok (and even expected at times), but let's try and keep it somewhat contained.
Reaperfan

Random meme to have something pony related going on: 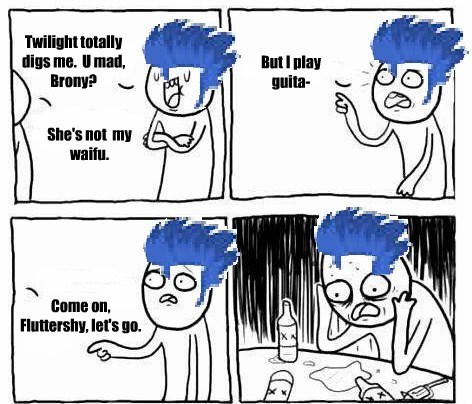 Who took my fluttershy?
Reaperfan

That guy on the internet. Better go after him and win your waifu back. I'll get my camera and record the whole thing. Maybe get the license to air it as a romantic comedy TV series.
Hart

Random meme to have something pony related going on:

anyway, found this and thought id share it with the bronies

Hart wrote:I think its Rainbow Dash (don't know what they're all called lol)
>mfw i possibly know a pony's name
>mfw i have no face

It's hard to tell because they've whited out all the colors and hid the shape of the mane, but seeing how the little bit of mane showing by her neck is jagged as opposed to flowing, I'd say it's most likely Rainbow Dash. But seriously, if that's her they even covered her wings with that shirt. Yo fanartists, if you want someone to see your pimped-out version of a character, don't hide all the identifying features of said character under the bling!

>yfw you were able to identify a pony who had next to no identifiable visual features
>yfw you have actually DO have a face, just nobody here can see it since this is the internet
GrinTwist

That guy on the internet.  Better go after him and win your waifu back.  I'll get my camera and record the whole thing.  Maybe get the license to air it as a romantic comedy TV series.

You go get that license.

I'll go get back my waifu.
Hatsune Miku

I want a divorce, now.
Soul of Stray Demon

But aren't you fluttershy? OH MY GOD, how is that even possible?
Sponsored content