By Gwyns beard... I'll finish this on June 1st! I have uploaded everything but weapons/shields and the Japanese interviews. I got close I have them all scanned but I am of weak resolve and all good wanderers need their beauty sleep.

You guys were being so sadistic about the titanite demon boss that I had to nap for a good 48 hours before my next upload, so its not even really my fault.


EARLY CLASS ART: (none of you appreciate how much work goes into the deprived class)
https://soulswiki.forumotion.com/t4931-dark-souls-design-works-wip#86607

Nope, the DW Riders would have been amazing! I feel like they should attack you randomly when you're in the Abyss. They come out of nowhere, then potentially fade out to nowhere again! Would be a good place to fight them, though. They could give some cool loot if you manage to kill them while they're charging you. I could see TWoP being actually useful for this; you could farm DW Riders with it and get their awesome loot. Say: normally they just charge you out of nowhere, hit you, then disappear again. But if you have TWoP on, when they get near you they switch from a charging attack to some horseback swordsplay. So much potential...

And yeah, that was a lot of work for the deprived!
Yukon

I think thats part of the reason why they took them out, I was thinking it over and it would pretty much set you into one of a few playstyles, being a faith user, a spearman, or agile roller.

I don't think you could really tank a hit from a charging horseman, you would have to evade him, or twop him, or have a spear of your own to knock him off. Short of hacking at the horses knee caps with your +4 Bandit knife. I don't know if I'd feel okay taking my Zweihander to the chest of a horse and watching it ragdoll haha. It would have been cool, it might have been difficult to execute, so there's logic in their leaving it on the drawing board.

... Then again with the DLC who knows, they did throw the tophat archer in there as a phantom.
Eolan 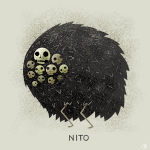 Hey yukon awesome work! How are them developer interviews comin along?
Yukon

Sorry gwyns beard, it was my roommates birthday yesterday and I forgot that when I made my last post. Well I only have to reupload the interviews, since the forums won't allow larger than 800px images without cutting them off, and the text looks difficult to read at that size I'll have to post thumbnails and link to another image hoster I assume. But you can check out the weapons here:

And expect to see the better images of the interview shortly. For now they are somewhat readable, but could get better.
https://soulswiki.forumotion.com/t4931-dark-souls-design-works-wip#86612
BLA1NE

I wish they'd kept that quiver of Dragonslayer Arrows!
DoughGuy

Its so annoying trying to read these. Everytime I do it doesnt load everything straight away so I spend ages waiting for them all to appear.
Still thanks for doing it Yukon, I enjoy looking at these.
Yukon

HM, I was hoping splitting them into spoiler tags would make the page less heavy for slower browsers. I'm not sure of a better way to work around it dough, if you want I could try posting thumbnails and you could load them one at a time.
DoughGuy

No dont worry about it, I just browse the rest of the forum as i wait.
cloudyeki

I just realized that shiva is holding a sword that doesn't seem to be in-game. It might be the zwei, but I always thought it's blade was thicker and it had small serrations at the base.
Yukon

It reminds me most of the balder side sword, but I forgot to bring it up when I uploaded it. Or maybe I did and no one responded initially. It looks really cool though, I gave shiva a +1 rep for his concept art. Badass.

Come to think of it, that isn't the BSS, its some strange sword.. HALP I NEED A TRANSLATOR
cloudyeki

It's probably the zwei. It wouldn't surprise me that they felt it didn't mesh with his style and switched to the Murakumo. Hell, it'd explain why he wields that when it only drops from him and the giant skellies.
Yukon

I'm going to go ahead and make a crazy assumption that it might be a weapon that we were meant to make with a boss souls, which was later removed.

Just due to its location in the book, its surrounded by other boss weapons and the zweihander is much larger and not golden I believe. Shiva was written to have more dialogue than he did in the end perhaps this sword was the outcome of his plot line.
cloudyeki

That's a possibility. I'd hope that if it is put in with the DLC that it has the range of a UGS with the moveset of a GS or CGS.
BLA1NE

^Penetrator Sword. Came at a steep reduction in damage output, though. Since staggering isn't as bad in Dark Souls, because of poise, I could see a weapon like the Penetrator Sword coming at less expense in damage.
cloudyeki

With the reach of a UGS, moveset of the BSS, and the hornet's ring! Over Kill!
Madara 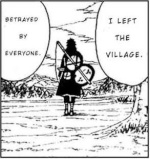 Guys, is anyone here capable of tranlating the interview pages? I (unfortunately) cannot translate and currently have the book

I was hoping I would find someone willing to translate by making this thread but no one stepped up haha.
Eolan

I found something. Its someone who translated into french, wrote an article and then converted to english but its interesting nonetheless...


Note the part about Lautrec's development being separate to the core design...


Actually its very interesting..! Regarding sens...

"In the
interview, Miyazaki adds that the system with the giant stone was also a
kind of "troll" to players, including the fact that the machine from
which projected the stone regained its original position when the player
set foot in a certain area."
BLA1NE

I can't translate japanese, but would've been happy to offer my french translating services... until I remembered the link is from google translate! I'm reading it in french and forgot it was linked in english. I'll read both, and if there are any discrepancies with the auto-translate, I'll mention it.

I finally got my Design Works book a few days ago. The concept art is awesome. Though now I have to find a means of translating the interviews.
Drascoll

Not to necro an old thread, but I want to thank everyone who posted these images this is one of the coolest things I'v found of late. I was recently obsessed with the base relief to the right and left of the 'Madonna and Child' sculpture in Undead Parish. I was looking all over the internet for a clearer image of the Worshiper with the dragon egg and what look like a Chimera behind him. I was obsessed with the symbolism of these four heads.

The questions this relief raises in my mind may never have answers. However the symbolic parallels it purposes are interesting to me. For example the 3 animals and 1 man are 4 heads. Four head's of state? Or are they just Tributes to there god? The large Dragon egg? If it's tribute who would have access to such an offering and which religion would most benefit by offering this to there lord? Two goat heads and a Lion, are these also just tributes? Or does the Lion represent nobility and the goats represent maybe (this is a stretch) the undead because goats are often associated with hell or the darkness in mythology? Was Undeadberg always a society or undead? According the Crestfallen Warrior, New Londo used to be a home for the Undead as well. Could the two goats represent New Londo and Undeadberg while the Lion and the Man represent other provinces of the nation? That is assuming that the child is Gwyn, however I am not certain of this. I feel that the pattern in the relief dose tie it to a common pattern in Anor Londo architecture.

I have the sinking feeling that it could mean nothing because I have yet to find this symbol anywhere else in the game world. Could it be nothing more then artistic flourish that serves no greater purpose then to look good?


I'm still not sure what it means exactly. While I've been obsessed with Dark Souls for a long time because Quelaag on Youtube turned me on to Dks lore and then soon after started fallowing Epic Name Bro. I've only recently had the opportunity to play the game myself now that it's on PC. I've been a huge fan of Mythology before I found this game, and DKs seems to engage me on the same level as Greek an Nordic myth. so cool.

TL;DR.. Thank you. thank-u, thankyou, for this awesome thread.