Once I fought Maneater and he went to the side of the bridge. I ran and hit him, which knocked him off the bridge. Then, he just disappeared. I waited, and waited, and finaly restarted my game. Then I fought him again and killed him.

On a diffrent game I fought him, and he was flying around. I shot him with soul ray and he dodged it. Then, he flew to the top of the tower the old monk is in. I could see him, but I could not target lock on him. When I finilly found a spot to shoot him my arrows I could not hit him. I finally restarted my game and killed him.

I played this game about 8 times and this boss only fled like a cowared twice. I was wondering how often this glitch occures. I'm guessing it is pretty rare.
_________________ 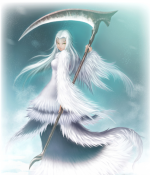 This has happened to me on numerous occasions when using the Theif ring and separating them via running side to side until only one follows you.

You have to take off the Thieve's Ring and wait close by it. It can take anywhere from 1 minute to like 10 minutes but eventually it'll come back.

I've never had a case where it didn't come back though once I literally waited about 25 minutes before it finally did.
_________________
Support Shield Maiden!
Let's Play Demon's Souls: Shield Only!
Status: In-progress