Just stoked because I finally got platinum on dark souls. The only 2 games I have got platinum on is demons souls and this one. Thats all, this thread is totes useless so if mods wish to delete, feel free

Well done tofucataur, and welcome to the club!

Congratulations, I actually just got mine today as well

And lol Demon's is the only other platinum I have too, what a coincidence

The way things are going our little club won't be so exclusive any more!

congrats sloth! nice one! yah, I havent gotten into any other games enough to bother going platinum....I was one off on assassins creed 2....and I like dragons dogma, but probs not enough to trophy hunt. I am sort of excited about the ffxiv re release, although I still feel the burn of the initial release, but thats out in march, if thats good and has trophies I might go for it..... I really wish monster hunter was on ps3.... oh, and WTF last guardian, I love the previous team ico games...maybe I will trophy hunt on the re release of the team ico games sigh..
TheAshenPhantom

I have only two platinum's. First was for AC2 and the second one is for Dark Souls. Still love playing Dark Souls, just need to get into the pvp aspect more or just stickwith the co-op
Gazman0169

Same as, two only- Limbo and Dark Souls, both on the PS3. AC2 I stopped playing when I got Dark Souls funny enough, and so I never got passed the 90+ mark. I think I'm around three trophies shy of the Platinum, and so will probably return to it one day, but for the time being I'm spending a much needed vacation on Dead Island.

I havn't platinumed dark souls
Havn't made a best Raw, best Crystal, or best fire weapon
Havn't found all pyromancies, miracles, or spells.
Havn't made and owned all weapons.

Pretty much I've just never bothered to collect -everything- on a single character.
tofucactaur

I did get a few of the upgrade trophies from an extremely generous giftwraith one day. I was just duelling this dude in the burg and he just started dropping stuff..... Demons one was not too bad, everyone seems to have trouble with pure bladestone, but I think I got it before I had enough chunks..... lucky on that one I guess....

Limbo is pretty cool, maybe I will play that a bit more...
SlakeMoth

Congratulations tofucactuar and Sloth. I thought I'd feel 'stoked' too and be leaping round the room like a Michael Flateley clone on acid but, strangely, I felt a little sad, as though it was 'all over.'
tofucactaur

Yeah, to be honest I sort of have those feelings aswell a little bit....
I will probably play a bit less now and play co-op or pvp occasionally, but I do feel as though I have achieved a great deal in this game, and sometimes I wonder what to do....
Same thing happened to me with demons when darksouls announced, I smashed the platinum and then played invasions on and off until release... I don't play very much apart from souls, the odd bits of MH and draagons dogma right now

I really hope the next one is as great as the last 2.
SlakeMoth

I never tried for the Platinum on Demons' Souls but maybe I might give it another go. On the other hand I might go back to Skyrim for a while. I've heard the new DLC (Dragonborn) is good and set in Morrowind type country which will do me fine.
tofucactaur

Oh yeah, I still havent tried that game, maybe time to pick up a copy

Congrats! I'm also on the list of people who have only platinum'd Demons and Dark Souls.

Tha darkmoonstone was the worst ever! Had to get a guy to let me borrow his weapon just to get the trophy... stupid gecko's. Haha I actualy got my by bladestone from the BP skeleton on my first try.

I've got like 90 something on Falout New Vegas, but since I have everything already I'm pretty much on god mode all the time and the game is no longer fun for me.
BLA1NE

Pretty much I've just never bothered to collect -everything- on a single character.

Of all people, I thought you would've gotten it a long time ago!

For me, it was pretty much a race to get the platinum as soon as I got the game. And wikis were bare bones back then so it was hard to gather all the information needed. I had pages of notes and checklists, to get it done as fast as possible!
Djem 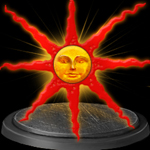