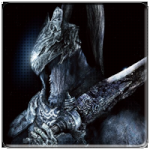 What kind of bosses would you like to see in a Souls-like game? By Souls-like game I mean any game really with similar mechanics when it comes to movement, combat etc. I'm not asking for looks of the bosses, I want to hear (see) some cool mechanics mentioned.

My personal ones:
1. As for design to match the mechanics, the bosses would be some vampire-like twins in a room with flows of blood (or some kind of energy). The shape of the room & obstacles could match the O&S room.
The battle itself would be a dual battle, kind of like O&S in DS. However, these would have a HP regen channeling ability, kind of like Artorias' attack boost, that would trigger at 25% HP, regenerating for example 0.75% HP per second. Once one of the bosses goes under 25% HP, he'd move away from the player and start channeling the ability. The ability could be canceled by staggering the boss. While one of the bosses went regenerating, the other one would become significantly more aggressive, staying on the player and even trying to keep him away from the other boss.
Once one of the bosses dies, the other one goes back to full HP. It doesn't get any attack boost or new attacks. However, it gets a "Life Transfer" ability, which converts damage dealt to player into HP restored to the boss, based on overall percentage. For example, if a player has 1,000 HP and the boss 10,000 HP, when the boss hits the player for 250 DMG, it restores 2,500 HP to the boss. Easy for skillful dodgers and tanks with 100% damage reduction shield, annoying for the rest.

2. Giant golem-like armor shell, made of multiple smaller armor sets seemingly smelted together. The boss room would be a large arena-like place with no obstacles.
The global boss HP can't be damaged, but each body part (arms, legs, w/e it would have) has it's own damage meter, and when it reaches certain amount, the body part disconnects and starts fighting on it's own. Only by defeating the part itself the player could drain bosses HP. The HP would be divided into sixths (6 enemies total) and at 50%, after defeating the 3rd part, the remaining ones would disconnect, making it 3vs1. To make it more interesting, each mini-boss would have a "profession". Thus, out of the 6, 2 would specialize in magic attacks (ranged & close), 2 in ranged melee and 2 in close combat melee. The first 3 fights would be every profession individually and the final 3 would be all three professions together.
To balance it out, the mini-bosses would be semi-difficult and in the first half of the fight, the main annoyance is gonna be the remaining body, so that the player wouldn't be at an extreme disadvantage during the 3vs1.
GrinTwist

I myself prefer a boss to be aggressive towards the player and not give us too much breathing room. To be honest I've always wanted an enemy that has a similar moveset to a character like Ciaran, an aggressive boss that dual wields and constantly tries to put pressure on the player. However just for the sake of difficulty if the player were to gain some distance I'd give the boss the ability to do a long ranged throwing knife attack with the disadvantage that the attack takes 2-3 seconds to pull off.