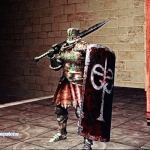 Im not sure if there was a thread made already about this, if there was please lock this thread and direct me to the previously active one. But we all know that the director of demons/dark souls is no longer in the driver seat of the new coming title dark souls 2 but instead a supervisor to make sure that the game started off on the right foot in development.
So with that being said, theres a few things going here. We know for a fact that hes working on another title, and one of the studios thats working on a (some?) ps4 titles is from software. Is it possible that a possible ps4 exclusive made by from could be Des2? I remember epic name bro made a reference in hopeing that he would go back and make des 2 as a sony exclusive (since the original des was a ps exclusive) since he dosent have high hopes for dks2.

What do you guys think?
Dubscythe

I think (and hope) he's working on a brand new IP instead of Demon's Souls 2. Don't get me wrong, I love Demon's Souls but if he's not working on Dark Souls 2 I'd rather see him work on something new rather than on a Souls game that less people would play than even the first Dark Souls.

I doubt they would make Dark Souls 2 and Demon's Souls 2 in parallel. It doesn't make sense to be working on two competing games at the same time from a business stand-point.
_________________
Joking aside.