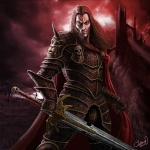 Fist of all, I am not sure if this thread really belongs in this section because it involves talking about both Dark Souls and Demons Souls. But anyway..........

My friend has recently played the beginning sections of both Demon and Dark Souls because he wants to get one of them so he can play it with me. I am trying to give him as much information as possible to help his decision. So far he is set on Demons Souls because he thinks its easier. Here is what happened: (try not to laugh)

Demons Souls:
He made it through 1-1 with only a few deaths, which is expected from a new player, but he beat the first boss without dying. I think this is funny because he was about to give up on 1-1 but i told him he was so close to beating it.

Dark Souls: (this is where you might laugh)
He could not make it past the Asylum Demon. He tried four or five times but could not do it so he gave up.

This is why he is set on Demons Souls. He thinks it is easier and he thinks the graphics are better.

I am fine with whatever decision he makes, i just want him to have a good amount of info about each one so he makes the best decision.

What all should I tell him about each game? Not too much detail, but enough so that he can get an idea of what it is about and what he can expect.
AnCapaillMor

Is he trying the asylum the first time(as in not running through the side gate when he initialy jumps down)?

let him play on in demons, then show him some Dark youtube vids. After demons he'll be dieing to give dark another go and the vids will be hook line and sinker.
PyroElleh

Oh my.... 4 or 5 deaths? Well, on the one hand - I wouldn't think that dying 4 or 5 time to a boss is that big of a deal. It sounds rather normal for a first playthrough, really. But on the other hand - dying that many times to the Asylum Demon? Uh, hm. I'm wanting to know the same thing as AnCapaillMor: he didn't try to kill it with the broken sword, did he? ._.

I haven't had the opportunity to play Demon's Souls (no PS3 for me), so I can't make a great comparison. But wouldn't the player base for Dark be more active at this moment in time? I think that'd be reason enough to play Dark Souls.
Dark Spirit EliteBiker20

I guided him through all of the areas and told him exactly what to do. He didnt fight the Asylum Demon with the broken sword either. He had all of the starting weapons for his character and he even did the drop attack.
Yarxov

The graphics in Dark Souls are better if you dont have the brightness at max.

Dark Souls has more online PvP, more areas and replayability. I love Demon souls but it will be a full generation old since 2 is coming out soon. For Online and Multiplayer Dark Souls is the way to go. However, both are cheap by now so he should get both.
Sponsored content