Congrats, your curiosity has made you click this thread titled "Brief [useless] mathematician view of Pyromancy". It is compromised of about a day's TEDIOUS work of mostly writing down information, making/cropping graphs and directly coding these tables into the post. As you can guess, this is absolute proof that I have way too much time on my hands and I should consider a better hobby! But, you have not come here to read me ramble. Thou has cometh to drink from the fountain of useless information! The following 2 tables indicate damage done to a Dregling and to a Black Knight using a +0 Pyro Glove and a +5 Ascended. It also shows the percentage of difference in damage between the 2 values.

*: I am aware that 0% means that your damage did not increase, therefore you're facing some massive defenses, but this is not practically possible because pyromancy power increases. There should be a minimal percent of difference each magic can have, which is the difference made by pyromancy's increasing power compared to the opponent's defenses (which will never equal 0%). No, I don't know these minimums.

The third table is a direct comparison between damage values from Dreglings/Black Knights at equal levels. This time, the percent differences shows how much effect armor has in a particular level, namely at the minimal level and the maximum level. Lower percent means that Pyromancy with that particular Pyro Glove will deal more similar damage to lightly and heavily armored enemies alike. High difference means that the particular magic is only useful against lightly armored enemies.


Thus, we arrive at graphs. Let me first explain how this goes. Each graph will be a straight line (or of a linear equation) due to how Pyromancy upgrades by a consistent amount. Each equation (displayed next to the graph) will have a form similar to 'mx + b'.

'm' will be a number that varies from graph to graph. That number represents the damage per Mag. Adj. that the Pyromancy deals against that particular foe. This number (Damage per Mag. Adj) is affected by defenses, hence why there are two graphs per image. 'x' represents any Mag. Adj value of your choosing, this means that, following this equation it should be possible to roughly (not exactly) calculate the damage you can inflict by said Pyromancy if your Mag. Adj was say... over 9000.'b' is an intresting number. It pretty much tells you what your damage would be if your Mag. Adj. was 0. I have no solid calculations/theories, but I speculate that this constant number is yet another representation of the effect that your opponent's defenses are having on your damage. I call this number "Defense Level". Unlike percentages, this does not represent how high an impact defense is having on your pyromancy scaling, rather it is giving you a number, that represents the strenght of your opponent's defenses or how effectively they are being shielded from damage, regardless of the power of your pyromancy. The lower this number is, the more effectively your opponent is blocking constant damage. Note, that it is possible in 1 case for the damage to be positive, but that simply means their defenses are practically being ignored.

*: There is an awkward case with Fire Surge, where the Black Knight has lower "Defense level" than Dreglings, despite taking less damage. This leads me to speculate that perhaps the "Defense Level" represents how much damage is being consistently reduced despite your  Mag. Adj, but a part of their defenses could also be going to reducing your Damage per Mag. Adj, meanining that while they reduce damage less effectively, they hamper the damage scaling to compensate. 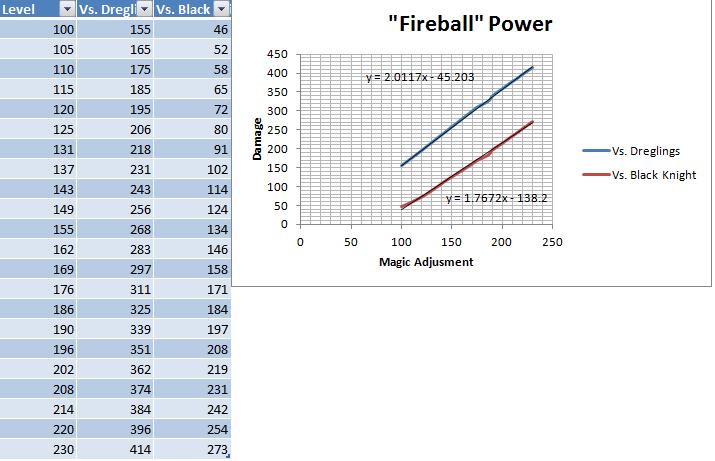 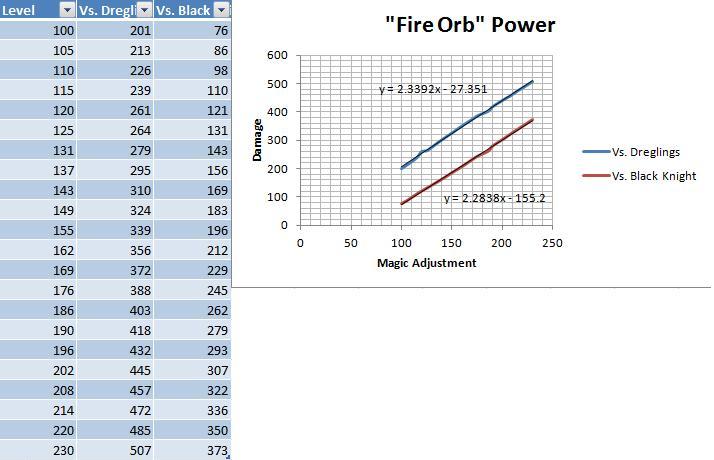 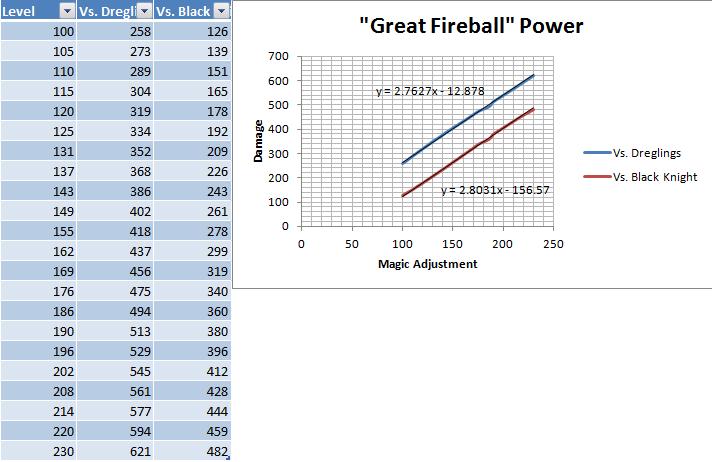 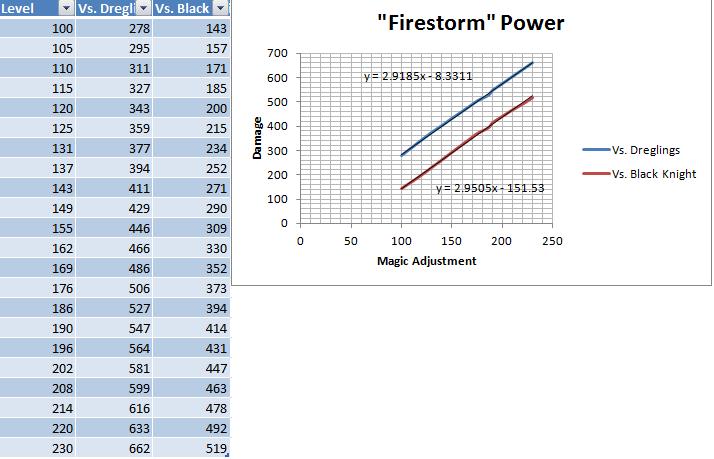 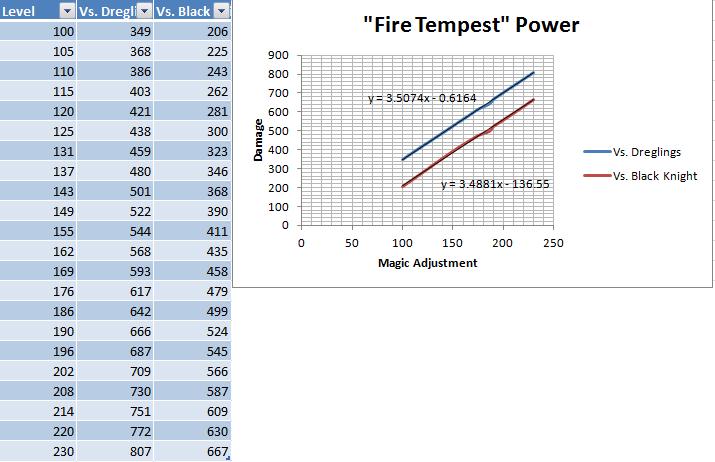 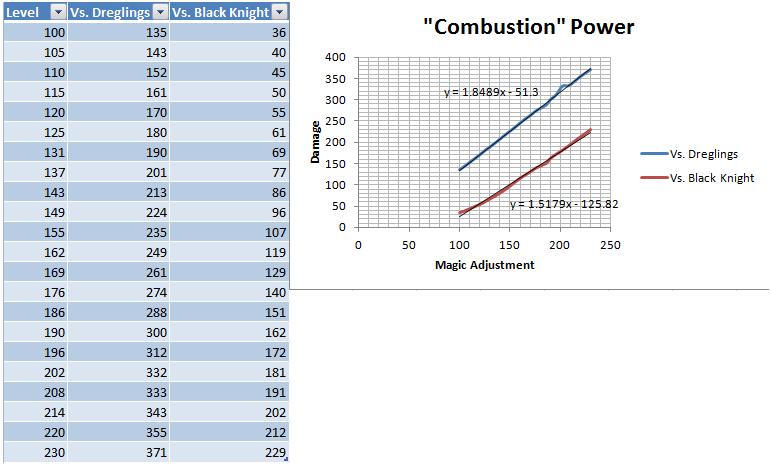 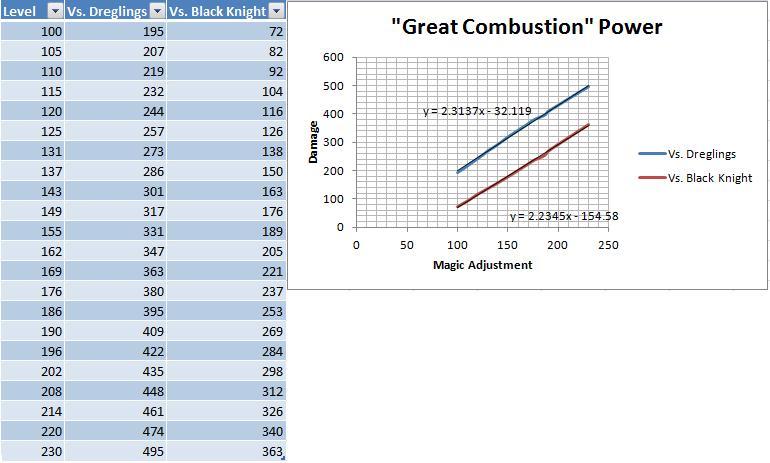 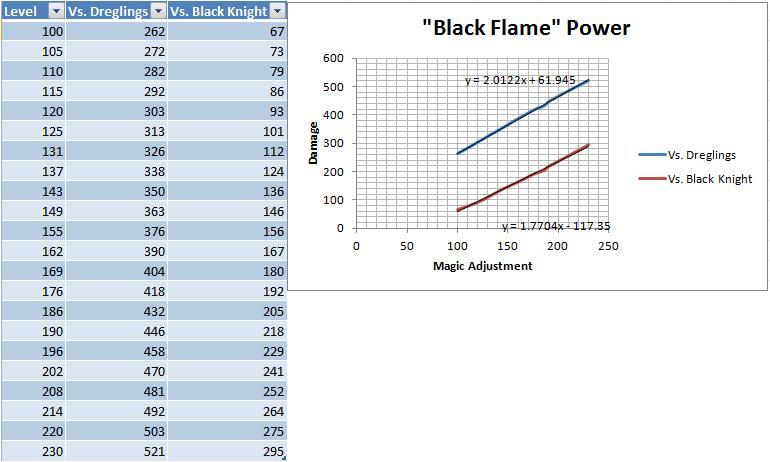 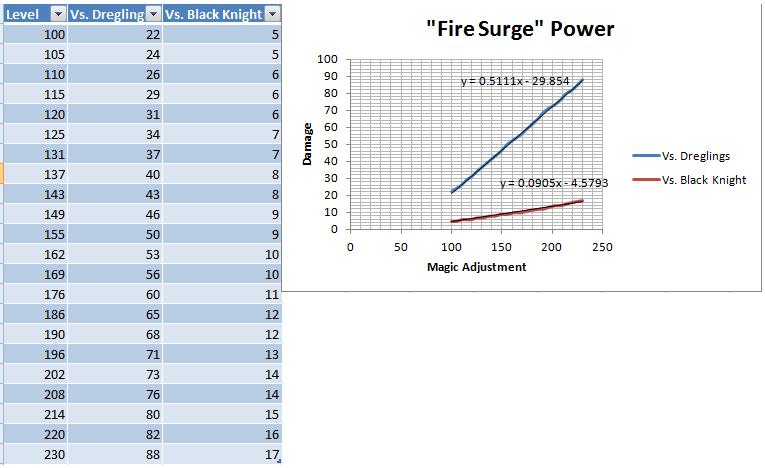 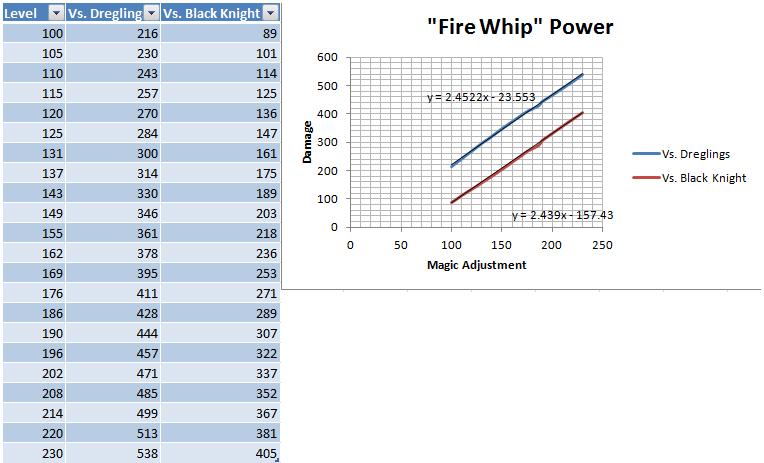 In reality, most of this information could be false, badly calculated, wrongly interpretted, etc; being erroneous. However, I had quite a bit of fun doing this and I think that data is consistent to be able to draw some conclusions from this information, such as Damage per Mag. Adj. True, all this data only gives you a representation, not solid numbers. 100% difference doesn't mean you dealt double damage, it is simply a representation of the magnitude of forces at work that I could not decipher. Still, I hope you had a good read with this and I managed to entertain/fascinate you.
WhatDoesThePendantDo?

Out of curiosity, why did you select those two enemies? And I'm guessing you tested on the Kiln Black Knights, but which Dregling group?
Seignar

Dreglings were the weakest things in terms of defense I could find. My test subjects were the trio in the Sunlight Altar. Black Knight armor descriptions hint them being resistant to fire, while not being unreasonably strong like Demons. I suspect I made the right choice:

1) No enemy I tested, not even the slimes in the Depths took more damage than Dreglings with regard to Fire (Okay, I didn't tests the Ghosts...)

2) I had asked a player that took slightly more damage against Pyromancies what their Fire Defense was. They responded with 300. Meaning Black Knights have a little over 300 Fire Defense. This is pretty much big, reasonable Fire Defense that you'll see in PvP.

3) Demons were too resistant to fire. I would guess their Fire Defense would be around 400-500. Not very likely in PvP to matter and not frequent enough in PvE either (not like you'll actually hit them with fire...).

4) Queelana uses hax and apparently has Fire Defense somewhere like 10000 or something. That woman reduces Fire Surge all the way to 1, which means her defenses have to be 10 times stronger than Fire Demons, not taking into account the massive diminishing returns she should be suceptible to.

» PVP stats - How to view them
» Stereotypical view
» Useless spells
» Most useless entrance ever?
» Video with interesting view on PvP