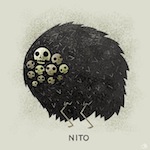 After watching vegeta's series, I did my own NG run, finishing tonight. It wasn't too bad, but definitely harder than SL1, since I was pretty much limited to a heater shield, hand axe and soul arrows.

He commented that he thought it wouldn't be doable on NG+. My feeling is that if he can't do it no one can, but I'm interested in what would be the hardest bosses. My thoughts:

Capra - have to use vegeta's trick of hidden body and hyper mode, but it still requires flipping around perfectly in a very tiny space as to avoid aggro-ing the dogs

Nito - more for the skeletons, since I assume they would take you out in one hit

Centipede Demon - I did fine with my heater shield the first time, but he may be strong enough to break your guard the next time around.

Bosses that would be a huge pain -

Gwyn - Requires you to parry perfectly about 30 times. That or run around a pillar like I did and use 40+ great soul arrows

Seath - Super resistant to magic. Even with seance + bellowing ring I'm not sure if you'd have enough magic. Probably have to go two-handed against his tail and it's going to take a while.

Demon Firesage - Can't stay far away because the ax tracks perfectly. Hard to stay close because if you get hit by the explosion you're dead too.

4 Kings - the granddaddy of them all. On NG I had to use all 40 great soul arrows. Blocking the ranged attack isn't an issue with great magic shield, but in this case you're going to have 2-3 other kings on you at the same time while being at range. If you try the flip strategy you may get one-shot just by a hilt blow.

Low level sorcery wont be able ot get enough damage. Like he said an NG+ run is possible, it would mostly be just you using a +10 fire dagger because there is no other way to get enough damage quickly. So I wuold think it owuld become more like a normal SL 1 run, except with no pyromancy.
JoeBroski09

you could do it, hyper mode would become your best friend though.
TheBigLebowski

That's how I do it with low level builds. Pyromancy with the dragoncrest ring destroys the 4 kings for example on NG and NG+.
callipygias

that third att slot makes the sorcerer the easiest class offensively, but the 8 end make it the toughest defensively.
sjackson12

I suppose pyro is an option, though to me that would kind of defeat the point.
vageta31

I do believe it's possible, the point I mentioned in the video was that it probably wouldn't be very fun to watch as it'd become more of a melee video. Personally I wouldn't mind as I love melee, but as far as for entertainment purposes it might be a bit boring watching me wail away with a dagger.

RT ring with the other magic boosting gear allowed me to dominate NG, but in NG+ those spells would begin to weaken. I think the first half would be doable fairly easily, but the 2nd half of the game from Anor Londo out would be much tougher. Doable yes. Fun to do or to watch? Maybe, maybe not.

As for the "why no pyro" question.. I wasn't simply doing an SL 3 sorcerer playthough, it had other rules to increase the challenge. One of them was no pyromancy as it's extremely overpowered for a low level run since you can max out your glove without raising your soul level thus defeating the entire point of the challenge. I also didn't allow myself any hp/weight reduction items so no masks, dwgr, rofap, etc.. I'm assuming sjackson wanted to emulate my ruleset as well so he stayed away from pyro.

I think if I were to attempt a NG+ with my sorcerer I'd have to relax the ruleset a bit or else it'd be tedious. I did an sl 5 naked run before the sl 3 sorcerer but it was extremely boring to watch.
FinPeku

Out of curiosity, have you planned to make a new video series soon? I remember you said something about videos containing shortcuts and other various PvE tricks.

Out of curiosity, have you planned to make a new video series soon? I remember you said something about videos containing shortcuts and other various PvE tricks.

Well firstly I'm finishing up the series I never completed and we'll go from there. Right now part 5 of my "everything before the gargoyles" is uploading to youtube, then I'm planning on uploading the 6th and final episode tomorrow night. I also plan on taking out Gwyn with my sorceress since I never got around to it.
I'm not sure if I'll do another series yet or just wait until the new content comes. I still might make a few videos covering shortcuts and other tips and tricks since it's a lot less demanding than a full playthrough.
FinPeku

Good to hear. It's been a while since you uploaded the part 4, so i was beginning to wonder whether you're going to complete the series at all

And sjackson, if you do a NG+ run, get it on video, please!
Sponsored content