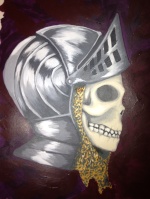 
I found this article from 6/13 and wanted to post it up. I am not certain if this is old news rehashed by a desperate journalist
or fresh info, (appologies if the former) but it is very interesting. It appears the Sony computer entertainment worldwide president loves
demon's souls and would like to have a sequel. Given that Miyazaki is not directly involved in the making DaS2, one could assume he would have the
Time to dedicate for such a venture. It would certainly be successful, that is, if From was the development team responsible.
Has anyone read this?
_________________

Dark Souls is a spiritual successor owned by Namco, not a direct sequel, as Demon's Souls is owned by Sony. Sony studios president made these comments after Dark Souls was released, reflecting on the mistake they never published Demon's to EU/US, but wants to create a Demon's Souls 2. They could theoretically do it. Perhaps many years from now if/when the DaS franchise has deminished and we are all crestfallen we will get a surprise announcement..
_________________

"To be concerned about being grown up, to admire the grown up because it is grown up, to blush at the suspicion of being childish; these things are the marks of childhood and adolescence. When I became a man I put away childish things, including the fear of childishness and the desire to be very grown up." ~C.S. Lewis
phastings

But don't u guys see the possibility? Given the alarmingly high success of the souls titles, when considering the popular-by-default hand-holding, cinematic games these days, it would be another step forward in facilitating a standard for similar challenging games, which cater to and are in the best interest of the actual gamers.

it could be done if From wants to do it. Shoot, even if a smaller team worked on a direct demons souls sequel, using the same tech they used in 2009 it would be an instant hit among the cult.
- The damn PRESIDENT of Sony gaming wants it to happen.. the PC crew were able to successfully petition a port, so too can be petitioned a demon's souls sequel..
_________________

I don't know... if it was to DeS like DkS2 is to DkS (as in occurring before) it might work. I think if they set it after it might get too far into the future and we wouldn't really have the kind of world that a Souls game usually exists in (unless humanity got really stupid really fast and tried to use soul arts again right after you put OO back to sleep... you did put it to sleep right?). That is of course assuming that another game in the Demon's Souls universe would continue to revolve around the awakening of the Old One, which doesn't necessarily have to be case.
Seignar

They will have to get working on it during 2015. They can't go about competing with Dark Souls II, especially considering all the initiatives it took. If they really want a Demon Souls II (which is one side of the same coin), they have to either:

1) Compete with a possible Dark Souls III.
2) Wait for Dark Souls to stop having sequels.

(2) is especially true if Dark Souls II turns out even better than its predecessor. Even if it carries the "Demon's Souls" name, more people will be inclined to Dark Souls. Really, they lost their chance when they let Dark Souls go unchallenged.
_________________
Research into Poise Armor
The Karmic Justice Phenomenon
Data for Mask of the Father
steveswede

Sony are not obligated to hold back on anything.  They own the rights so they can go to another developer if they wanted to or even one of their own 1st party developers.
phastings

good points. i dont see it happening, as you said, seignar, competing. Who knows what was in the contract From signed when going into business with Namco. Its a strong possibility they cannot work on a demons souls, legally. That doesnt mean Sony cannot hire another development team to do it, but would that result in a true souls game? not likely. I just think it is interesting given this fellows influence, being a president n all. I would love to see a direct sequel; straight up cult style, with ALL the same difficult amenities
_________________