usually I play on PC. I never had a gaming console.
Also with Dark Souls! A fantastic game! It's been quite a while ago since I have been so impressed by a game!

Now I also want to try Demon's Souls. But I need a ps3.
Here are a few questions:

There are a few versions of the ps3 on the market. Which one is recommendable to buy?

I don't think that I will play a lot of games on this ps3 since I like PC with it's open architecture, comfortable Internet access and all the other things that you can have open in the background. But as a matter of fact unfortunately I need a ps3 for this Demon's Souls.
That is why I don't want to spend too much money for new hardwae!

I want to chat parallel to the game with friends or co-op players.
Because I don't want to have to switched on ps3 and a PC I need a keyboard of course. And a mouse would be a good thing, wouldn't it?

Because Demon's Souls is older than Dark Souls: are there still enough people in the web playing Demon's Souls? I surely also would like to pvp and co-op a little!
Is this even possible at all as it is in Dark Souls?

Sorry for my bad english, I'm not a native speaker.

Many thanks for your help and suggestions!

Demon Souls isn't dead. Right now I have 3 of my psn friends playing it. From what I've read in here, Fridays are the busiest.
If you aren't planning on using ps3 alot, maybe buying a second hand one would be good for you. Mine is second hand and never had any issues.
_________________
Announcement:
Support the Dark Souls Wiki: 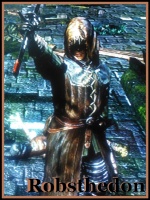 I wouldn't worry so much about the hardware, honestly. In fact, I can tell you're not exaggerating saying you've never owned a console because of all the worrying you're doing about it :razz:

One of the big draws about consoles for some gamers is that all the hardware is set and ready to go out of the box. You don't have to worry about specs or cards or attachments (with the exception of peripheral-based games like on a Kinect or PS Move) because all of that is standard across the board and preassembled. As long as you have somewhere to plug it in, it will play your games (on the PS3 after a period of installing/updating/patching/creating accounts etc, but you should be used to all that on PC).

That being said, the only issues you should worry about are price and your computer monitor, and those are easy to manage. Get the best version you're willing to pay for (if you don't plan on playing anything but Demon's Souls you should probably go with the cheapest version since you won't need much). As for the monitor, as long as it has an HDMI cable plug-in you'll be good to go in terms of what works. If not, you'll need to pick up a TV, and since most HD TV's double as computer monitors, consider it an upgrade from your current monitor (I personally use a 22-inch HD TV as my computer monitor).

Oh, and as a last note you'll want a USB keyboard for the PS3, definitely, but you won't need a mouse. The controller is your mouse for menu navigation. The PS3 has a built in messaging system with people you've friended, so you can use that to communicate.

Also, wow, I really like using parentheses, don't I?

"To be concerned about being grown up, to admire the grown up because it is grown up, to blush at the suspicion of being childish; these things are the marks of childhood and adolescence. When I became a man I put away childish things, including the fear of childishness and the desire to be very grown up." ~C.S. Lewis
twigsterxd

by Reaperfan: One last, last note, for real this time
If you don't have an HD TV and can't get one, you can also use AV jacks to play on a non-HD TV. Obviously the games won't look as good, but you can still play them without having to drop lots of money on a TV.

That's me in a nut shell lol. If you can afford HD "GO 4 IT"
Playing on my tv is crap. I used landlords HD 1 weekend when he was away and didn't want him to come home lol.
I saw things I'd never saw before