Skare, the green color is fitting it matches well with this covenant.

Hey Grems. Sorry I've been inactive here, but I haven't had much too contribute without actually being able to play Dark Souls...however....I've been such a damn good husband (she had an operation), my wife said if I dont go get a ps3 this weekend she'll disown me.

So, gremfun sounds like the best "comeback-build", I might miss the event, but I'll be seeing you guys online soon...mwa...MWA...Mwahahahahahah!!!!!!!!!!!

I got a high-def camera, so I'll prolly record some prankery...I just dont know how to edit the movies or anything.

I'm as excited as a school girl, I thought she was gonna hold me to my promise.

hi!
_________________
Night gathers, and now my watch begins.
I am the sword in the darkness, I am the watcher on the walls, I am the fire that burns against the cold, the light that brings the dawn, the horn that wakes the sleepers, the shield that guards the realm of men.
I pledge my life and honor to the knight's watch for this night and all the nights to come.
Serious_Much

I Pm you Skare

What did you expected?

Count me in, I shall commence pranking immediately.

I shall play our end song/verse now (unless skare decides its not)...

we are the champions:

And also, hey whats up rant.

We keep growing, please welcome Wilks to the gang!
_________________
Possibly (likely) the last crazy/important thing I'll ever do before the move
WhatDoesThePendantDo?

Welcome to the dirty side of the Forums, Wilks.

Thanks for the warm welcome guys... Now After that mind blowing ray of cuteness Skare made me watch.. I did My first pranks!

They took place in the Depths.

Prank No. 1: I spawned in and immediately ran to the bonfire, and I saw the host standing in the room, I did a quick praise the sun gesture and shut the door... Then the horror began (For him)... I poisoned him so I always knew where he was, Backstabbed him with my bare hand so I could run off.
He then started to look for me after I went and hid, I would go to the nearest barred fence, and stand behind it, so when he would walk by he would see me... standing there... with no weapons... He then tried to hit me, but it failed so he ran off. I ran to the next closest Barred fence and it repeated, but this time he didint bother to hit me, he just sprinted off. I then rushed to the boss fog gate, where about 5 minutes later I came out of a corner and ambushed him, instantly killing him. I then threw a dung pie at him.


Prank No. 2: I spawned in and did my usual routine of running to the bonfire, but the door was shut. A huge grin grew on my face because I knew he would have to start all over at firelink if he died, but I wanted to make it special. I hid in a room with a barred fence, the only way in was through the baskilisks. He had two phantoms, one which was alone, and I backstabbed and killed. The other two came into the basilisk room, one phantom was cursed, as I could hear the sound effect. Then I sprinted up with just my fists and a talisman. I spammed force and made him stagger around until the curse effect took place, and then I broke his little curse statue, and dung pie.
_________________
"You never truly discover the nature of a weapon until you pretend to be it's former master"

My daughter and I just finished some sidewalk chalk art. She had me do an outline for her and she did the clothes of her "doll" 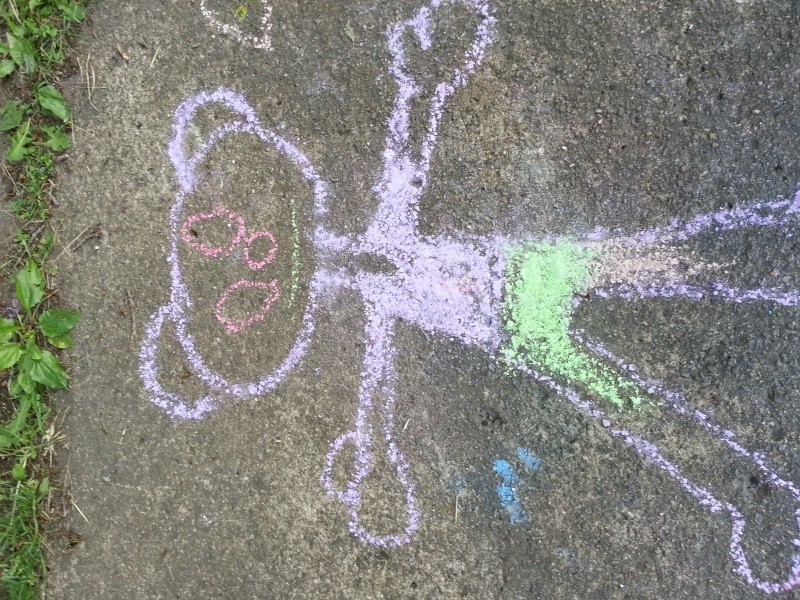 Attention! ALL GREMLINS! It's time for a roll call!

Due to recent events (actually a lack thereof), I feel like we need to determine the actual interest in this covenant.

We have quite the members list, yet the actual activity has been bleak. I've come out of Dark Souls retirement several times now in the interest of having fun with this group, and more importantly, many of my forum family. However, we have other ways to enjoy each other's company and this is rapidly feeling like one of those deadweight covenants.

So, please respond in this thread if you still have an active interest in the covenant.

Before you do, I am proposing a change in event organization. Prior to an event, either myself or the GremSay would be required to send ALL listed members a PM. This message would be a formal request to join the event. A call to arms if you will. All members MUST respond to this message or have their status in the covenant reevaluated. It will not be mandatory to participate. You can decline in the response.

Going hand in hand with this suggestion, event threads will list all Gremlins, not just those who signed up. Anyone declining to participate would have that noted by their name.

If these changes are acceptable, please respond in this thread as stated earlier.

Also, feel free to alert any other Gremlins to this message if you think they might miss this announcement.

I will be leaving for vacation tomorrow morning and returning Thursday night. I will have limited time to respond here during that period but feel free to ask any questions and I'll do my best to respond. When I return, I will begin cleaning the list up.

I want to thank everyone for their initial interest and especially those who helped develop the covenant and the few that have maintained a presence with the group.
_________________
Possibly (likely) the last crazy/important thing I'll ever do before the move
Sponsored content